What is Kratom, Kratom Mitragyna speciosa is a plant commonly native to Southeast Asia. It has been used by locals for hundreds of years for its medicinal properties, it is a relative of the common coffee plant. It is most normally taken in the form of a powder that can be mixed in a drink, made into tea, put into capsules or just taken dry and washed down with a drink. The most common consumer reported effects of kratom are euphoria, energy, relaxation, pain relief, and anxiety relief these effects vary depending on the strain of Kratom being used. Because of these properties, it is becoming popular in the US as a natural alternative to prescription painkillers. The primary active ingredients in kratom are Mitragynine and 7-Hydroxymitragynine, both of which are  considered Opioid Receptor Agonists, meaning that they react with the same receptors as traditional opiates. For this reason, it has gained popularity as a natural option for people coming off opiates to reduce withdrawal symptoms. 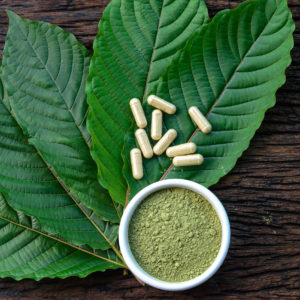 At low doses, Kratom has been reported by consumers to work similar to a stimulant. People who have used low doses generally report having more energy, being more alert or feeling more sociable. But at higher doses, it has been reported as being sedative, producing euphoric effects, dulling emotions, sensations and relieving pain.

The two main active ingredients in kratom are the alkaloids mitragynine and 7-hydroxymitragynine. There is anecdotal evidence that these two alkaloids can have analgesic (pain relieving), anti-inflammatory, or muscle relaxant effects. For this reason, kratom is often used by consumers to ease the symptoms of fibromyalgia.

The kratom plant’s dark green leaves are typically dried then either crushed or powdered to be prepared for use. You can find fortified kratom powders, usually green or light brown in color. These powders also contain extracts from other plants.

What Can Kratom Do For You?

Most of the psychoactive effects of kratom have evolved from anecdotal and case reports. This plant has an unusual action of producing both stimulant effects at lower doses and more CNS depressant side effects at higher doses. Stimulant effects manifest as increased alertness, boosted physical energy, talkativeness, and a more social behavior. At higher doses, the opioid and CNS depressant effects predominate, but effects can be variable and unpredictable.

Beside pain, other anecdotal uses include as an anti-inflammatory, antipyretic (to lower fever), antitussive (cough suppressant), antihypertensive (to lower blood pressure), as a local anesthetic, to lower blood sugar, and as an antidiarrheal. It has also been promoted to enhance sexual function. None of the uses have been studied clinically or are proven to be safe or effective.

Consumers who use kratom anecdotally report lessened anxiety and stress, lessened fatigue, pain relief, sharpened focus, relief of withdrawal symptoms. It has been reported that opioid-addicted individuals use it to help avoid Narcotic-Like Withdrawal side effects when other opioids are not available. Withdrawal side effects may include irritability, anxiety, craving, yawning, runny nose, stomach cramps, sweating and diarrhea; all similar to opioid withdrawal.

Why Is Kratom Controversial?

To date Kratom has not been studied in-depth by the medical community, so it hasn’t been officially  recommended for any medical use. Clinical studies/trials are very important for the development of any new drugs. These studies help to identify unknown harmful effects and harmful interactions with other drugs. These studies also help to identify dosing guidelines that are effective but not dangerous.

Kratom has the potential to have a strong effect on the body and can contain nearly as many alkaloids as hallucinogenic mushrooms and opium. Alkaloids can have a strong physical effect on the human body, some of these effects can be positive, while others can be causes for concern. This is all the more reason why more studies of the plant are needed. There could be significant dangers or adverse side effects, and proper safety guidelines currently have not been created.

Results from one Animal Study suggested that mitragynine, the major psychoactive alkaloid of kratom, may have addictive properties. Dependence on kratom may often cause side effects such as nausea, sweating, tremors, the inability to sleep, and hallucinations. The production of kratom has not been regulated by the FDA, there are no established standards for safely producing this product and as of now the FDA doesn’t monitor the safety or purity of herbs.

Where Can I Buy Kratom In Allen , TX

If you’re looking for the best place in Allen, Texas to buy Kratom than look no further. At CBD American Shaman of Allen, located at 549 W McDermott Dr, Allen, TX 75013, we are dedicated to bringing you only the highest quality products available.  All of our Kratom is sourced from 2 farmers in Indonesia with decades of experience growing and harvesting the plant. Our kratom is 3rd party lab tested for purity and contain no pesticides or heavy metals. Come in today and get started on a new, healthier you! Our hours are Monday through Wednesday, 10am – 9pm, Thursday through Saturday, 10am – 10pm, and Sunday, 11am –  7pm..  If you have any questions regarding Kratom or any of our CBD products, please give us a call at (214) 785-7224.